The Crumbling Tower is a tower located on a small island off the north-west coast of Isle of Souls, which can be reached by using the fairy ring code BJP and running westwards. Several Forgotten Souls can be found on all three of the tower's floors. On the 1st floor[UK]2nd floor[US], a rope spawn can be found, and on the 2nd floor[UK]3rd floor[US], a pestle and mortar spawns. 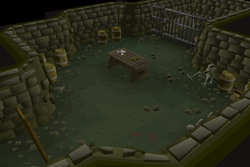 In the basement, players can find Dark Chests, which can only be opened with a dark key. Some bones, leather gloves, and a bronze pickaxe spawn down here as well. A few spiders also inhabit the basement.

A part of the basement wall, directly south of the table, can be inspected, giving a message in the chatbox stating Someone has crudely carved a message into the wall: 'The Soul Stone was here. Where is it now?'