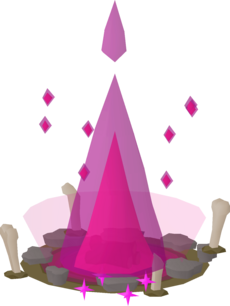 The fire of domination is a fire pit with a purple flame in it that prevents anything within its range from teleporting, as well as granting the fighter massive strength and impenetrable Defences. This type of fire was used against the player during the fight against Mother.

Currently, players cannot create such a fire, as Odd Mushroom's notes which contained the precise combination of salts were damaged, and may be lost forever, since he is now dead.