Mother (full name Mother's Left One) is the leader of the town of Weiss, and the father of Snowflake.

He is known to be very arrogant in his ways, claiming physical strength to be the determining factor in a troll's ability to lead, and consistently berates his advisor, Odd Mushroom, for speaking grammatically correct common tongue and making rather useless inventions; the only time he praised him was when Odd Mushroom presented him the Fire of Domination. He had set up an arranged marriage for Snowflake and Don't Know What, his strongest sentry.

After being tricked by the player, My Arm, Snowflake, Odd Mushroom and the Wise Old Man, he plans on killing them all. He manages to mortally wound Odd Mushroom, who succumbs to his injuries later, and Mother is eventually killed by the rest of the group. After his death, Snowflake takes over as the leader of Weiss.

During the fight against Mother, he has the Fire of Domination lit up, which makes him massively powerful and immune to any damage. In order to hurt Mother, players must take a bucket and use it on the large barrel of water to extinguish the Fire.

He is able to launch boulders towards the player, which can hit through protection prayers. He will also knock players backwards, draining their prayer points. 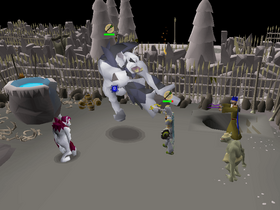 The player, My Arm, Snowflake and the Wise Old Man fight against Mother.
Retrieved from ‘https://oldschool.runescape.wiki/w/Mother?oldid=14262598’
Categories:
Hidden category: