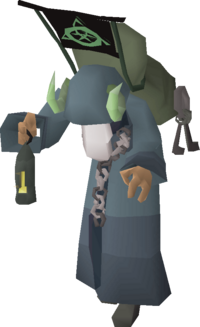 Asgarnia✓Asgarnia? (edit)MaleTalk-toThe keeper of keys, cursed and bound to protect the Arceuus Family.

The Key Master is the keeper of the keys to the three gates that contain Cerberus. He is spoken to during the Bear your Soul miniquest, as he is the only one who has the ability to repair the soul bearer, an ancient artefact that draws souls from one place to another, enabling it to travel within the River of Souls across the dimensions. He is located outside the entrance to Cerberus' Lair in the Taverley Dungeon.

The Key Master was once a wealthy businessman who owned several apothecaries across Great Kourend, a large kingdom west of Tirannwn.

He sought to create the perfect potion, spending some time finding special herbs and exotic weeds. He eventually succeeded, stating that it tasted delicious, but claimed it was missing a crucial ingredient. He added magic roots to the potion, causing it to pulsate and glow. When he took a sip of it he had felt "like a million gold". However, a few seconds later, several negative side effects (a blurring vision and throbbing brain) had caused him to collapse.

Waking up, he began to scream in pain and blue foam had been coming out of his mouth. In addition, his eyesight worsened, but was able to see three of the Arceuus Elders, who wielded green banners. The tallest of them approached him, at the brink of death, claiming that they can save his life, and so they did. However, this came at a cost: he was still blind, and horns began to grow on his head. He was cursed to take on the role of the key master, where he is tasked to prevent Cerberus, guardian of the river of souls, from escaping the iron gates that hold her.