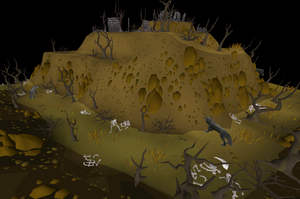 Mynydd is a lone mountain located just north-west of Prifddinas. It is dotted with dead trees, and towers over the small village of Gwenith. It is also the only mountain in Tirannwn aside from the Arandar mountain pass.

In order to reach the mountain, players must travel to its base in the south-west. There is no other way to ascend the mountain.

The book, Legends of the mountain, provides the player with three local folktales surrounding Mynydd.