Saranthium was a city established somewhere around the 37th and 38th century of the Third Age, that sat upon the ruins of Senntisten, the capital of the Zarosian Empire. It was built by Saradominists for the sole purpose of covering up the remains of Senntisten. 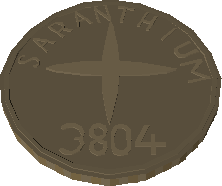 A coin that was used in Saranthium, recently found by the Varrock Museum dated year 3804 of the Third Age

Before and during most of the God Wars, the capital of the Zarosian Empire called Senntisten stood where Saranthium was later built. Senntisten was the largest and most important city of Gielinor at the time. It was constantly under attack during the God Wars, by the forces of Zamorak and Saradomin, in an attempt to assume control over it. Senntisten managed to withstand for several millenia, but fell sometime prior to year 3740 of the Third Age, where it became briefly controlled by the Zamorakians, but was destroyed shortly after due to the immense resistance of the Zarosians, refusing to be commanded. After that, the Saradominists captured the area and erected a city above the ruins of Senntisten, creating "Saranthium", in Saradomin's honour.

Saranthium was a magnificent city of the Third Age. Similar to Falador it was marked by a very strong influence of Saradomin, having his symbols scattered almost everywhere on pots, jugs, urns, jewellery and even on the coins. Its beginnings were vibrant and successful, but that only prejudiced the city; it attracted too much attention, and made Zamorak focus his armies on the city. As a result it was promptly destroyed not long after it was built, while still unfinished. It still had some Zarosian markings under the soil and visible remnants of a temple, but since it was under the ground, Saradomin decided to only cover it with earth and rubble. There is however evidence that the city survived to some extent into the early Fourth Age as it was the hometown of the renowned heroine Camorra Shayzien.[1]

In the current days, the area where it stood is being excavated and many of the Zarosian markings are being discovered, along with more information about Saranthium.