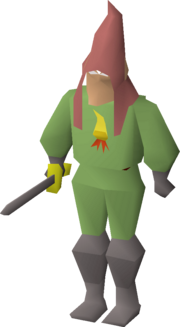 Lumdo is a member of the 10th Squad stranded on Crash Island. When spoken to he can take players to Ape Atoll. Lumdo is next to a rowboat on the south-east of Ape Atoll. The fastest way to get to him is through the Ape Atoll Arceuus Teleport.

He wields a bow during the Jungle Demon fight during the climax of Monkey Madness I.