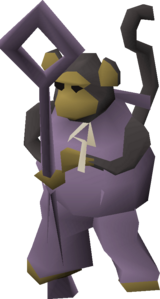 Bonzara is a mysterious, purple monkey. He's found inside of the gorilla statue (possibly of Marimbo) inside the arena where you fought the Jungle demon during Monkey Madness I. To get to Bonzara, you must find a trapdoor that leads to the bottom floor and go through the banana trees and enter the crack in the statue. Bonzara says that you'll meet again. If you defeat the Jungle demon and go down the trapdoor, the gnomes won't be on the platform anymore, if so, Bonzara offers a free teleport to the north-western part of Ape Atoll, just around some snakes, and spiders, so be prepared. It is recommended, though, if you do not have a Greegree, to Home teleport from the platform.

When you say you don't need help he says "We WILL meet again, (username)."

Bonzara apparently does not share the same hatred of humans that the other monkeys on Ape Atoll have, as he will be friendly toward you even as a human.