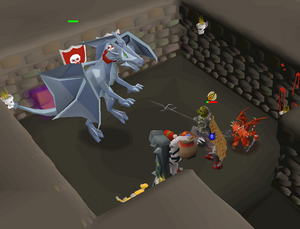 The Treasure room is a room in Player-owned house that can be used to contain a reward for players who reach it and kill the guardian. It can only be built underground and requires level 75 Construction and 250,000.

There are 5 hotspots available:

The guardian monster has to be killed before a player can get the treasure.

The treasure can only be opened once the guardian has been killed, and can store a maximum of 1,500. In addition, house owners must wait five minutes between adding treasure to their chest.

If players have more than one treasure chest, then they act as one; adding coins to one fills them both, and opening either one gives access to the full treasure.