Wizard Frumscone is a necromancer found in the basement of the Wizards' Guild, where he summons magical zombies. He is involved in the Swan Song quest, but does not play much of a role, as he sends you to speak to Malignius Mortifer instead. He wears robes similar to wizard robes.

His colleagues at the guild think him crazy, but he dismisses them as not understanding the power of zombies.[1] 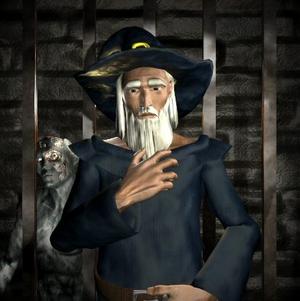