Growthlings are monsters that appear during the fight with Bryophyta. She will occasionally summon growthlings to attack the player. Even though Bryophyta can continue summoning them throughout the fight, there can only be three growthlings present in her lair at any given time.

They can be killed via any means, but players must use (not wield) an axe or a pair of secateurs in order to finish them off once their hitpoints reach one or zero. Should players forget to bring one, they can take a bronze axe from the log on the eastern side of Bryophyta's lair. 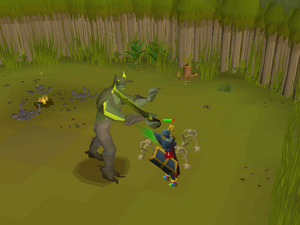