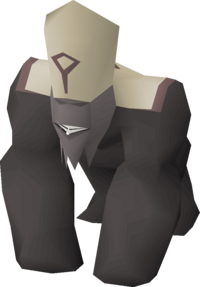 Hafuba is the head priest of the Temple of Marimbo on Ape Atoll. He can be reached by going up the stairs on the north side of the temple, or by using the Ape Atoll Teleport spell unlocked by completing the King Awowogei subquest of Recipe for Disaster, which takes the player directly to the altar at Marimbo. Hafuba is non-aggressive to all players, whether they are wearing a monkey greegree or not, the likely reason for this being that players teleporting to Ape Atoll are required to use a magic spell, something which is not doable while in the form of a monkey. However, upon being spoken to as a human, Hafuba will still tell the player to leave, and that he does "not know how you got here".