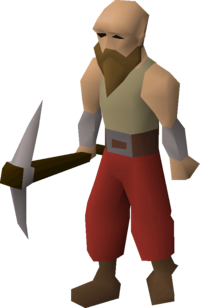 Thorgel is found at the end of the Temple of Light, next to the mysterious ruins of the Death Altar. He is involved in Mourning's End Part II. Players need to retrieve 50 items from a list given by Thorgel in order to receive a Death talisman in Mourning's End Part II. Alternatively, they may simply purchase one and bring it with them. Should the player want to receive another death talisman from him, the player will need to retrieve another 50 items from his list again.