Arcis is the Arceuus architect of Great Kourend. Arcis can be found in the building east of the Arceuus bank. If you have 100% favour and have talked to her after gaining it, she will be next to the statue of the castle in the middle of Great Kourend instead.

Players must speak to her after gaining 100% Arceuus favour as part of the Architectural Alliance miniquest. She builds the legs, robes, and feet of the statue. The easiest way to get to her is via the Arceuus Library Teleport and running South, or the Kourend Castle Teleport and running North. The Fairy ring CIS is also just north of her. 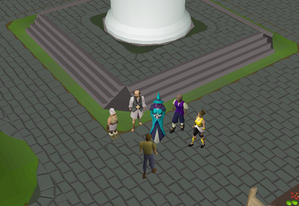 The architects of the five houses unite and rebuild the statue of King Rada I.