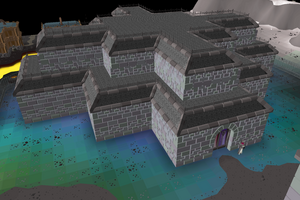 The Tower of Magic, also known as the Arceuus Tower, is an inaccessible building in Arceuus, west of the Grand Library.

Prior to The Ascent of Arceuus quest, players cannot enter the tower, as the Tower Mages will stop them, stating that Lord Arceuus does not wish to have his experiments disturbed.

According to Pagida, an expert in the field of magical traps, the Tower contains many powerful enchantments concealed throughout the levels of the Tower, and hides many levels and rooms from sight.

Players are able to visit the Library Historical Archive, which is part of the Tower. In addition, players visit a prison within the tower during the quest Tale of the Righteous. Players are allowed access into the Tower of Magic during The Ascent of Arceuus quest.

The Tower was constructed under the rule of King Rada III, though the exact date of its construction, and its initial purpose, remains unknown. Following the rebellion of the five families against King Rada III in 5th BA (five decades before the signing of the Twill accord), the Council of Elders was formed, and the Tower was used as a meeting place for the Council. Since then it has been mostly used as a residence by whoever was ruler of the city, with each of the fifty different leaders using the tower however they saw fit.

It is known, however, that King Shayzien VII had spent more time in the Tower of Magic than any other king, and oversaw construction of various new sections, including a prison, which was built around the same time as the expedition to Mount Quidamortem in the 36th decade.

For the past two decades, however, the Kourend Council has led the Kingdom. As the leaders of each house prefer to reside within their own Houses, Lord Arceuus now controls much of the Tower, and is very secretive, forbidding access to the upper levels of the Tower until the events of the quest The Ascent of Arceuus.