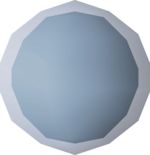 The oculus orb is an item which allows players to have total control over the camera, an ability which is useful for content creators. The orb can be purchased from Diango's Toy Store in Draynor Village for 60 coins.

It has a Scry option that lets the player more freely control the viewpoint of game client, making it possible to not have it centred on the player character as it does normally. However, players cannot use it while in combat, and can only see as far as the game has loaded, meaning the orb cannot see players and non-player characters beyond their normal field of vision. In addition, interface elements and all environmental overlays (such as the water overlay that appears when players travel underwater) are removed when players use the orb.

By using the oculus orb, players can view the interior of the barracks in the Drill Demon random event area, which cannot normally be seen by players.

Not only can the oculus orb be used for making videos and taking screenshots, it can also be used for taking a closer look at areas which players either cannot access, could formerly access but can no longer do so (the former King Black Dragon Lair, which is in the Temple of Ikov), or ones which are unrelated to the area the player is currently standing in and are only visited via completely different methods (the Mime random event area, which can be seen with the orb if scrying from Iban's throne room after completing Underground Pass).

The orb cannot be used on Old School RuneScape Mobile. Attempting to do so results in the chat message Scrying is not available on this platform. 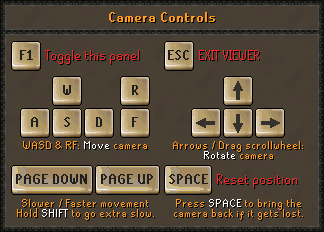 The controls help interface which appears after using the Scry option on the orb.

The orb can be used by selecting the "Scry" option. This will temporarily remove the user interfaces and make the player invisible to themselves; others will see the player's character looking at a scroll, an animation shared with viewing the fullscreen world map. An interface will appear on the centre of the screen showing the keys to control the orb, which can be toggled by pressing the F1 key.

If the player is attacked, they will exit the orb camera mode and return to normal gameplay. The usage of the orb around aggressive non-player characters may require some form of a safespot.