Upon completing the hard Wilderness Diary, an agility shortcut on the north side of the maze allows you to go to the centre of the maze with 82 agility.

Some items and coins spawn throughout the maze. A gold necklace and steel platebody spawn at the centre near the muddy chest. A muddy key is required to open the chest, which contains a fair amount of treasure; looting the chest will earn the player a mithril bar, a mithril dagger, 2 law runes, 2 death runes, 10 chaos runes, an uncut ruby, and an anchovy pizza.

Outside the maze to the north are two runite rocks. To the west is a metal fenced area containing more lesser demons and one of the entrances to the Lava Maze Dungeon. This entrance is the one players use to reach the King Black Dragon Lair. To the south is the Hobgoblin Mine.

Beware of the monsters as they can be very dangerous when adventuring throughout the Lava Maze; bring decent armour and food if you wish to survive. 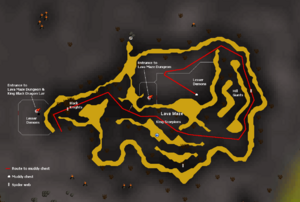