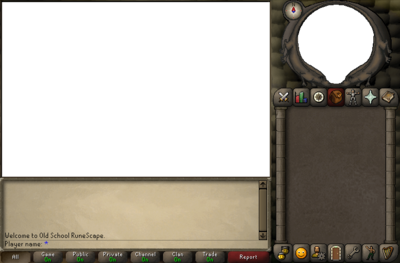 The interface is the screen containing different buttons which, when clicked, display different pieces of information. Some parts of the interface are permanently open, for example, the minimap.

The minimap is the section which shows a portion of the map around the player, including coloured dots, showing where people or items are, and icons, showing where features of the area are.

Data orbs display the players current hitpoints, prayer points, run energy and special attack. It can be toggled within the settings tab of the control panel.

Quick prayers can be setup by right clicking the prayer data orb, which can then be toggled on and off by clicking on it.

Run energy can also be toggled on and off by clicking on it, allowing to the player to either run or walk.

The control panel is the interface that surrounds the side panel of the player.

Within the interface also lies Auto Retaliate, which a toggle to whether or not if the player should attack back against their opponent. The special attack button can also be found here, where different weapons may possess a special attack and can be triggered by clicking on the button.

The Skills tab show the players current skill levels along with their total level.

Clicking each skill will open an interface showing perks that a player may unlock on certain levels with their level requirements. The skills tab will also show any current skill buffs or debuffs.

The Character Summary tab shows an interface that displays various statistics of the player's account.

The Achievement Diary tab shows a list of 12 areas within Gielinor. Each diary has a set of easy, medium, hard and elite tasks. When completing a task set in an area, players are awarded an item along with unique perks.

The Kourend Favour tab shows the percentage of favour the player has within a city in Great Kourend. It allows players to view favour-gaining tasks and milestones for gaining a certain percentage of favour. It also has a toggle in which allows the interface to be displayed in the top-middle of the game client whenever the player is in Great Kourend.

The Inventory tab shows all the items that the player is carrying. Players can carry up to 28 items (not noted/stackable) and an additional 11 in worn equipment. Non-stackable/non-noted items and worn equipment contribute to the player's weight.

The Worn Equipment tab shows all the equipment that the player is currently wearing or wielding. The equipped inventory is divided into 11 slots for each area of the body that some piece of equipment can be worn on.

The Prayer tab shows all the available prayers the player can use, along with their current remaining prayer points.

The Spellbook tab shows all the spells available to the player. Spells are greyed out if they lack the magic level required to cast the spell.

There are four spellbooks:

The Chat-channel tab is a feature in which players can chat with other players within both Old School RuneScape and RuneScape across all worlds. In order for players to send messages to the chat-channel, they must add a forward slash (/) prefix before their message.

The Your Clan tab shows your clan. In order to send messages, type (//) or (/c) before the message.

The View another clan tab shows others clans. In order to send messages, type (///) or (/g) before the message.

The Grouping tab shows different minigames to which a player can teleport to the entrance of the selected minigame, as well as the option to join the official Chat-channel of said minigame.

The Ignore List tab is accessed by clicking the button on the top-right of the friends list. It shows the list of ignored players which hides all their messages and prevents them from entering the player's chat-channel.

The Account Management tab shows information relating to the account's membership, messages received through the Message Centre and display name. It also has quick links to Old School RuneScape website and customer support.

The Logout tab contains a button that is used to log out of Old School RuneScape, which when clicked, takes the players to the log-in screen.

Within the logout interface, there is a world switcher button, which allows the player to switch freely between worlds.

The Settings tab allows players to change various settings within the game, including display, audio, chat and control settings.

The Old School bonds interface can also be found here, which allows players to deposit and withdraw bonds that the player has purchased.

The Emotes tab show various different selection of movements that the player can perform. Some emotes are already unlocked by default and locked ones can be unlocked through random events, quests, the Stronghold of Security, holiday events or by possessing a skillcape.

The Music Player tab shows different soundtracks within the game, which will play when a player is in a certain location in Old School RuneScape. Players can also click on songs that are highlighted in green to play them. Titles in red have not been unlocked, and thus cannot be played. There are a total of 728 music tracks.

The chat interface is what the player uses to communicate with other players and see what other players are saying. You can use prefixes such as red: or wave: to change the way the text will appear over your character. You can also talk to NPCs on this interface, private message, and engage in a chat-channel.