From Old School RuneScape Wiki
(Redirected from Nightmare)
Jump to: navigation, search
This article is about the boss. For the combat-based minigame, see Nightmare Zone.
"Nightmare" redirects here. For other uses, see Nightmare (disambiguation).
Loading...
ActiveIdle

The Nightmare of Ashihama, often simply referred to as The Nightmare, is a large, otherworldly horror who feeds on the life force of sleeping people, giving her victims horrible nightmares until their life force is completely drained and expires. There are no requirements to fight The Nightmare other than access to Morytania.

Players who have successfully defeated The Nightmare at least once can challenge Phosani's Nightmare, a much stronger version of the boss that can only be fought solo.

The Nightmare's true origins are unknown, but according to a legend in Ashihama, it was told that an ancient ritual was performed by several shamans, birthing an otherworldly horror that took on the appearance of a large, hag-like woman. For as long as the sirens of Ashihama can remember, The Nightmare has plagued them, their dreams stolen and feasted upon. These shamans appeared to have attempted to fight off The Nightmare, eventually culminating in the creation of four totems that could channel power to stop her, but the shamans were wiped out before they could use them on her.

One day, a group of sirens, led by Shura, defeated The Nightmare in its lair. Driven out of Ashihama, it fled west to the mainland, where it arrived in the Morytanian town of Slepe. Shura, wary of the danger The Nightmare poses, decided to pursue her to protect her home from the eldritch horror.

The Nightmare arrived at an opportune moment, with the town suffering from the sleeper plague. This in turn has allowed The Nightmare to draw victims into her dream world, stealing their dreams and feasting upon them, becoming stronger in the process. Shura, in turn, has enlisted the aid of numerous adventurers to keep The Nightmare in check, until she can defeat the Nightmare once and for all.

The quickest methods of reaching Slepe, where The Nightmare resides, are:

To begin the fight, approach The Nightmare's unconscious body and select the Disturb option. Players may join in the following 30 seconds before the fight begins: afterwards, players must wait until the fight is over (with The Nightmare or all the players defeated) before they may join.

Unlike other boss fights, The Nightmare's health and combat stats scale to the number of players in the fight (ranging from 5–80 players), though players can fight her with fewer than five. If The Nightmare is floating in the centre rather than lying on the ground, it is an indication that she is fighting a group of players; the symbols on the ground also indicate the phase she is in. 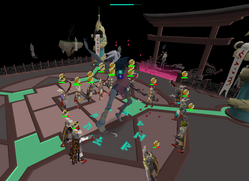 A large group of players in a mental battle against The Nightmare of Ashihama.

Every player in the fight who reaches the minimum damage threshold (which requires dealing damage to both The Nightmare's mental shield and the totems) will be eligible to receive a drop, with the quantity increasing based on how much damage they have done.

The player who deals the most damage in the fight will receive big bones and 10% additional non-unique loot. Additionally, when unique drops are rolled, a weighting system based on damage dealt determines which player will receive it. Players eligible for a unique drop will receive regular bones as a drop.

Drop rates estimated based on 251,259 kills from the Drop Rate Project, unless otherwise cited.

Additionally, there is a chance that both are rolled a second time (independent of the first rolls), with this chance being

Multiple players can receive the tertiary drops each kill. The MVP has a 5% higher chance of receiving each, with the exception of the Little Nightmare pet in teams of fewer than 5 players.[1]

This gallery contains previews shown on a livestream on 22 January.

A pre-release teaser in which a ghostly face of The Nightmare rises as the player dies.