A pickaxe handle was the handle of a pickaxe. When players were mining, a random event may have caused the pickaxe head to fly off. Players had to pick it up and attach it back onto the handle. A similar thing used to happen to players while woodcutting, only with an axe head and axe handle.

After random events were voted to be reworked in late 2014, they were subsequently removed from the game with the next update. 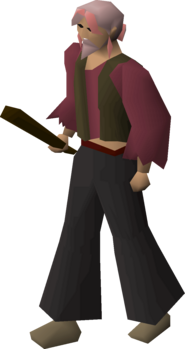