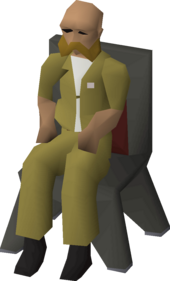 The Brown Engine Secretary is the head secretary for The Brown Engine mining company, one of the eight companies that form the Consortium and rule the dwarven capital of Keldagrim.

The secretary assists the Brown Engine Director, who manages the company. The secretary ensures that the director is not overburned by paperwork, and also helps to manage smaller affairs such as greeting traders and shooing adventurers out of the company's office.

It should also be noted that he will not allow women to join the company.