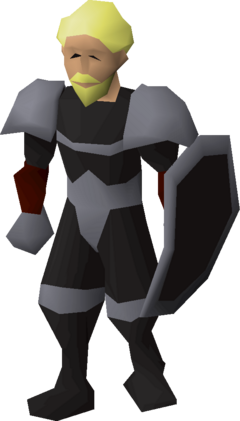 Veldaban is the commander of the Keldagrim division of the Dwarven Black Guard, the elite military and police regiment of the dwarves. Commander Veldaban can be found in the headquarters, west of the Keldagrim bank. As Veldaban is a commander of an elite dwarven force, he may appear harsh at first, but is actually a warm-hearted individual with the city's best interests at heart. He is always aware of all that takes place within the city and will always justify his actions while not causing unnecessary victims. He is kind and cares for all inhabitants of the city, especially the poor dwarves in the East. Veldaban is particularly suspicious of The Red Axe and their brutal methods of business. Much of Veldaban's early history remains unknown. His father is Dondakan, a rich and old miner.

In 169, the Red Axe bribed the Dwarven Boatman who ferries visitors from and to the entrance of Keldagrim to crash his boat into the statue of the great King Alvis, which was in the middle of the River Kelda, as soon as a human would board the boat. That way, Hreidmar could convince the other mining companies to rebuild the statue bearing his visage, rather than Alvis'. Soon, an adventurer asked the boatman to be ferried to Keldagrim on their first visit there, and indeed the boat smashed into the giant statue, looking like an accident. On shore, the adventurer was arrested by the Black Guard.

They were taken to Veldaban, but the commander knew it was just an accident (everyone unaware of the Red Axe's plot) and he cleared the adventurer. However, he suggest that they help Blasidar the sculptor in rebuilding the statue and so they did. They then joined a Consortium mining company and worked their way up to be able to access the next meeting. While Blasidar had been able to reconstruct the body based on the king's old, preserved items, he was unable to build the head of the king. As such, the mining companies congregated to discuss which director's head to put onto the statue, figuring that the Age of Kings had passed.

Veldaban and the adventurer attended the meeting and, because the directors couldn't come to an agreement, the adventurer was given the last say. They voted for the director of the company they joined to be the model and everyone agreed except for Hreidmar. The Red Axe director, realising his plan had failed, threatened the consortium but was not taken seriously. He left in a rage with his cat, even going so far as have the Red Axe step out of the Consortium completely.

At some point, an employee of a minor company, the Magenta Accordion, went on an investigation in the abandoned mines south of Keldagrim. After some travelling, they discovered a Red Axe hideout and an army of chaos dwarves. His memory was quickly wiped by Grunsh and he became nothing more than an extremely drunk dwarf. The dwarf caused some havoc in East Keldagrim, so Veldaban sent his new friend, the adventurer, to investigate. In return for a kelda stout, the drunken dwarf revealed being able to remember going into the abandoned mines.

After entering the mine, they encountered Hreidmar discussing plans with Grimsson and Grunsh, finding out they were responsible for the breaking of the statue. They then found archives of the Red Axe, containing records of the dwarven boatman and the drunken dwarf, amongst many others. Farther into the cave, they found Hreidmar and Grimsson showing their newest batch of chaos dwarves to Laneel, a gnome emissary from Arposandra, before being spotted by Grunsh, who erased their memory. They found themselves back in Keladgrim, unable to recount what had happened. They attempted to report to Veldaban, but could only think of kebabs and beer. They proceeded to drink themselves unconscious in the Laughing Miner Pub, with Grimsson spying from outside and concluding that the human was no longer a problem.