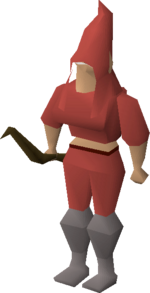 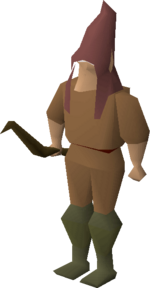 The gnome travellers (also known as gnome companions) are two gnomes on the 1st floor[UK]2nd floor[US] of the King's Axe Inn claiming to be from the Grand Tree, although one of them claims to be from the Tree Gnome Village before being corrected by the other. They disappear after The Giant Dwarf is completed. They appear to be led by the gnome emissary, Laneel.

They appear again in Forgettable Tale..., where they accompany Laneel as he observes the Red Axe's army of chaos dwarves. It is revealed in this quest that they are actually from Arposandra, and are assisting the Red Axe with the creation of their chaos dwarf army.