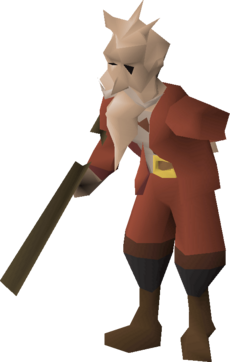 Hreidmar, the Red Axe Director is the villainous director of The Red Axe, a company that had positioned itself as the most powerful company in the Dwarven Consortium in an attempt to achieve dictatorship over Keldagrim, and the true heir to the throne. He follows Zamorak and is the main antagonist of the Rise of the Red Axe quest series. Hreidmar lived in Keldagrim, the dwarven capital city, until his company left the Consortium, which is when he resorted to hiding in Red Axe bases in abandoned mines. The dwarf owns a pet cat, whom he allows to roam his office freely.

Hreidmar was born in 21 or 22 of the Fifth Age to the director of the Red Axe. His family was presumably rich, living in Keldagrim West, due to the large influence and wealth of the company.

At some point, the dwarf inherited leadership of the Red Axe from his father and, under him, the company would expand massively. Hreidmar ruled with an iron fist, eliminating opposition whenever it arose. Many small companies were forced out of business by his actions, and many dwarves were left unemployed. However, many dwarves flocked to his service, feeling that his method of rule was superior to that of the other companies. Before long, he had gained a very significant following within the city, although his power was not so great that he could oppose the rest of the Consortium.

However, Hreidmar secretly plotted against the city, gradually formulating a complex plot to claim the city. He found out about the existence and nature of chaos dwarves: those dwarves who succumbed to a curse Zamorak had placed upon them in the Third Age, which would turn them into mindless and dangerous monsters of chaos. The Elders of Keldagrim had worked around this curse at the cost of losing Magic permanently, but Hreidmar was able to find out that the cure could be undone, allowing the curse to take over a dwarf once more and enabling him to create an army of dwarves.

Towards the late Fifth Age, he forged a secret alliance with the dark gnomes of Arposandra and received special warping machines used by the Arposandrans through their cruel emissary Laneel. These would turn his victims into chaos dwarves. However, the method was imperfect, because the chaos dwarves were still unable to use Magic. Hreidmar discovered a spell that would return Zamorak's curse completely, but this would turn him and everyone in the vicinity into a chaos dwarf as well, effectively becoming a suicide method. He established a network of spies in and around Keldagrim, such as Vigr, owner of a warhammer store in the palace. He also built a very large network of caves and storerooms to serve as the Red Axe Base in abandoned mines south of the city, using special mine cart tracks to prevent access to them.

After the gruesome Battle of Barendir, Hreidmar took the mentally unstable Colonel Grimsson under his wing. Laneel then provided them with Grunsh, a particularly powerful ogre shaman he had brutally kidnapped from Gu'Tanoth and forced to erase his own memories. On the gnome's advice, Hreidmar convinced the ogre that he had been rescued from Trollweiss Mountain, where he had been found frozen, to which Grunsh swore loyalty to the Red Axe in gratitude, wiping the Red Axe's victims' memories before their conversion to chaos dwarf. With two new allies, Hreidmar began kidnapping dwarves from the poor Keldagrim East, knowing they would not be missed. Additionally, he began expanding his already massive chaos army with chaos dwogres, terrifying hybrids of chaos dwarves and ogres, able to use Magic. Meanwhile, the Red Axe became the largest company of the Consortium, though still not large enough to outweigh the other seven.

Hreidmar's plan required the destruction of King Alvis' statue, a massive dwarven monument that stood at the city's entrance. Rising up from the bustling River Kelda, the dwarves had long seen it as a symbol of their prosperity, for it had been King Alvis that (inadvertently) led them from the dark Age of Kings to their Golden Age.

Keldagrim had only recently been opened to humans, and many dwarves did not trust them fully. Taking advantage of this, Hreidmar bribed a Dwarven Boatman to assist him in the destruction of the statue. The dwarf was instructed to ferry a human to the city from the mines - a common occurrence since the city's opening. When he neared the statue, the boatman pretended that there was something wrong with his boat. The boat crashed into the statue destroying it completely. The human (the player) was arrested by the Dwarven Black Guard, accused of destroying it.

However, the Black Guard's Commander Veldaban did not feel the player was responsible and, instead, asked that they help reconstruct the statue. The player accomplishes this over the course of the quest.

When it is nearly finished, however, a debate arises amongst the Consortium as to whose head should be carved on it. Seizing the opportunity, Hreidmar argues that, as the most powerful company director, he should have his head put atop the statue. The player, though, interferes, and chooses another director instead.

Enraged by the players' interference, Hreidmar boycotts the Trade Octagon and leaves the city, along with nearly every trace of The Red Axe. Over the course of the quest, the player discovers his intentions to claim Keldagrim in the name of Zamorak.

Hreidmar, in addition to destroying the statue, was already taking a number of actions to prepare for war. Secretly, he had allied himself with the gnomes of Arposandra. Together, they had begun manufacturing an army of chaos dwarves.

Additionally, Hreidmar had obtained the aid of Colonel Grimsson, an infamous dwarven warrior released from the Black Guard for his brutality. Hreidmar had also gained the support of an ogre shaman that was found nearly dead on Trollweiss Mountain. Using the shaman's magical abilities, he had erased the memories of those that discovered his plot.

Before the end of the quest, the player's memory is erased, leaving them unaware of The Red Axe's plans.