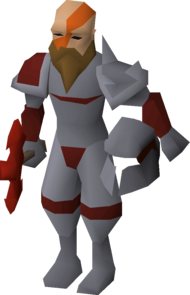 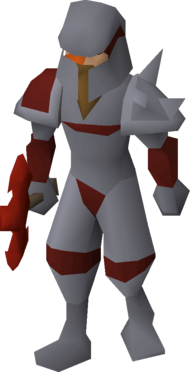 Colonel Grimsson, the Butcher of Barendir, is a member of The Red Axe Mining Company. When players first see him during Forgettable Tale..., he is called "Red Axe Henchman". Players learn of his name after searching the records room further through the Red Axe base.

The Battle of Barendir[edit | edit source]

The Colonel was a well known dwarf for his efforts in fighting the trolls. He fought as the commanding officer in the Battle of Barendir, where the forces of Keldagrim attacked a large troll army, mercilessly killing them even as they began to retreat. Soon, he found himself fighting a hand-to-hand battle with a "particularly ferocious troll", giving him the large scar across his face.

After this battle, Grimsson became more aggressive and belligerent towards others, including fellow dwarves. After a vicious attack on a comrade, he was dismissed from the Black Guard. He was later recruited by the Red Axe, where his trauma-induced madness and anger would be accepted as a strength.

In Forgettable Tale of a Drunken Dwarf, he is seen along with the Red Axe Director, Grunsh, Laneel the gnome emissary, and some gnome companions from Arposandra discussing the creation of the chaos dwarves and their current production status.

At the end of the quest, he is seen observing the deliriously drunken player speaking gibberish among the congregation of dwarves at the Laughing Miner pub. Seeing that Grunsh's spell was a success, he leaves the player unharmed, sure that no one will believe the player's tales of what they found.