The old diary is obtained during A Taste of Hope by searching the bed next to the staircase in Serafina's home.

Written by Serafina's brother, the diary describes Ranis Drakan and Serafina making a deal to cure her brother of his illness, which players find out later in the quest was transforming him into the abomination. The same story, but from Serafina's perspective, can be read in her diary.

If lost, it can be reclaimed from Serafina's home or from a bookcase within a player-owned house. 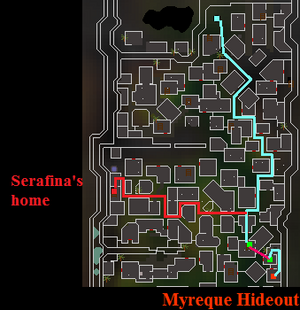 The route to Serafina's home, where the old diary can be found.

The following text is transcluded from Transcript:Old diary.

There was a strange man in our home today. He'd come to see Sera but she didn't tell me why.[sic] They went down into the basement to talk. She said she didn't want to disturb me but I wonder if there were other reasons.

I got a good look at him when he left. There was something unsettling about him, a strange look in his eyes that I didn't like. He also wore a large medallion. It stuck out to me as it seemed far too fancy for anyone around here to be wearing it.

I spoke to Sera after he left and asked her why he was here. She didn't tell me. She just said that everything was going to be okay now.

The man was back today. He went down into the basement with Sera again. I though about trying to sneak down to see what they were doing. I felt too weak though.

The fever has been extra bad recently and I've been struggling to even leave the bed. I wonder if that's what this is about. She's tried to hide it but I know Sera is worried. Maybe she thinks this man can help me. I know she feels responsible for my illness.

She was always getting herself into trouble. Too many fights with the wrong people. She said she was fine, said she could handle herself. She never thought it would put me in danger as well. All it took was one cut. it was just a scratch. I'd had worse. The wound festered though and now, here we are.

The illness has progressed quickly. I never leave the bed now. Sera is getting very worried. it's only two more weeks until our sector is the one to be tithed and she worries I'll be too ill to cope.

To be honest, she isn't wrong. Getting tithed is draining at the best of times. With me like this who knows what will happen.

It's now only one week until it's our turn to be tithed and once again, the strange man is back. Things were a little bit different this time though. After their usual chat in the basement, the man came to see me.

He stared at me for a long time, not saying anything. It was quite unnerving. Finally after what felt like a lifetime, he turned to Sera and said, 'he is compatible'. And with that, he left.

Now I was worried. it was clear that the man was coming here about me but I still didn't really know why. I spoke to Sera and insisted she tell me. She was clearly uncomfortable. In the end, she agreed to tell me. Not today though, but soon.

Three days until we are tithed. With not long left to go I knew that whatever Sera was planning would be happening soon. I reminded her of the promise she made. That she needed to tell me what was going on. Once again, she was reluctant, but eventually she agreed.

She told me that the man was here to help me, that he knew a way to cure my illness. She said that in a couple of days, he'd need to take me elsewhere so that he could perform an operation on me, one that would cure me forever.

Something didn't sit right with me about that. I asked her who he was and how she found him. She claimed that he was a doctor from sector five. I knew she was lying, no citizen, doctor or otherwise, could afford to wear clothes like that. I didn't dwell on that though as there was something bothering me even more.

I asked her how she could afford his services. We have close to nothing here, nowhere near enough to please a man with that much wealth. She didn't answer, but as she turned away I saw the tears in her eyes.

The tithing of our sector begins today. Sera told me that the strange man would be here shortly to pick me up. I don't want to go. Sera clearly hasn't been thinking straight and I'm afraid of the deal she might have made.

I'm helpless though. The illness means I can barely move. I have no way to resist. So instead, I rested, or at least, Sera thought I did.

While I pretended to sleep she sat next to me. For a long time, she just sat there, not knowing that I could see her. Finally, she said something that filled me with a fear unlike any I'd felt before. 'Forgive me'.
Retrieved from ‘https://oldschool.runescape.wiki/w/Old_diary?oldid=14216799’
Categories: