Ver Sinhaza is a castle found in the southern sector of Meiyerditch, where the vampyre noble Verzik Vitur currently resides. Beneath the castle is the Theatre of Blood, where people take on ferocious monsters and challenges set up by Verzik to provide entertainment for the vampyres.

According to Garth, the castle was once home to the Saradominist queen, Queen Efaritay. 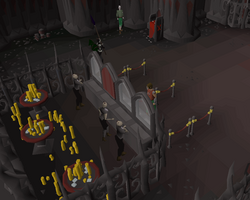 The bank in Ver Sinhaza, displaying the massive amount of wealth.

Otherwise, the player will need to traverse from Burgh de Rott and ride the boat there to Meiyerditch.