The Abomination is a monster fought during A Taste of Hope after it invades the Myreque Hideout. It is the result of a sinister experiment performed on Serafina's brother in order to allegedly save his life after he was cut by a poisoned blade.

It is given to Vanstrom Klause and Ranis Drakan by Verzik Vitur to help them hunt down The Myreque. She claims that the abomination excels at hunting down its targets, as once it gains a taste of a target's blood, it will find them no matter where they may be hiding.

Upon encountering the abomination, it has a combat level of 465, but is reduced to level 149 after Safalaan severely weakens it with his hidden power. While in combat with the Abomination, it may launch a projectile draining the player's stats by 1 to 3 levels. Using Protect from Missiles will negate damage dealt, however the stat drain will still apply. 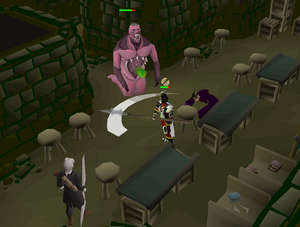 The player and Vertida fight the weakened abomination.
Retrieved from ‘https://oldschool.runescape.wiki/w/Abomination?oldid=14180071’
Categories: