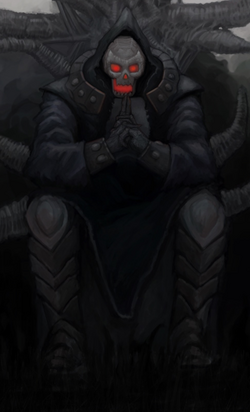 Zemouregal is a powerful Zamorakian Mahjarrat necromancer. During the Second Age, he was part of the group who supported Zamorak's successful attempt to overthrow Zaros and ascend to godhood.

He is most infamous for invading the city of Avarrocka with an army of zombies in the Fourth Age in an attempt to claim a powerful imcando dwarf shield. His zombie army was defeated by the great hero Arrav and the grandson of one of the city's elders with the help of the shield, at the cost of Arrav's life. Zemouregal subsequently retreated, taking an undead Arrav with him.

He is only referenced by the Wise Old Man and Viggora, and also serves as the main antagonist of The Legend of Arrav lore story.