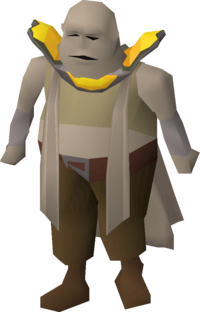 The Imcando dwarves are an ancient clan of dwarves, related to the ordinary dwarves. They once inhabited Camdozaal, a now ruined-city below Ice Mountain, but were believed to be extinct after the Runecrafting Crusades. They are well-known for their masterful smithing skill, having created the original sword of Sir Vyvin's family and possibly the Shield of Arrav, and their love of redberry pie. Additionally, most of the Imcando dwarves were followers of Saradomin.

Currently the only Imcando dwarves in-game are Thurgo and Ramarno. Thurgo can be found south of Port Sarim and north of Mudskipper Point. He is involved in The Knight's Sword and The Giant Dwarf quests. Ramarno is encountered at the end of the quest Below Ice Mountain and lives in the Ruins of Camdozaal. After the quest he can be found by the Sacred Forge.

The Imcando once lived in the great city of Imcandoria in the far north.[1] Towards the end of the Second Age, their city fell after a mysterious malevolent entity believed to be a part of Xau-Tak killed the inhabitants of the city and turned it into a frozen wasteland. With no home to return to,[2] the Imcando dwarves were promised a new home by Saradomin,[3] who would have his forces lay siege to Lassar and grant the Imcando dwarves a new settlement in the ruins of the fortress.

Led by Yonrith Lovakengj, the Saradominist forces marched upon Lassar and destroyed it in one of many attacks on the Zarosian Empire during the Zarosian Extermination in the Third Age. Once the Zarosian forces have been driven out, the Imcando dwarves set to build their new city, naming it Camdozaal.

Yonrith Lovakengj, who fled westward with his closest allies,[4] fled towards an uninhabited continent far west, and he (or his kin) eventually founded the city of Lovakengj.

Eventually, a group of Imcando dwarves travelled further southwards from Lovakengj and founded a city underground in the Avium Savannah, a part of the kingdom of Varlamore. Towards the end of the Fourth Age, they enlisted the help of an unnamed adventurer from Hosidius to help subdue a demon that was capable of summoning torrential rainstorms,[5] in which they forged a demonbane weapon to help the adventurer.[6]

During this time, it is not known whether they had remained in contact with their Imcando brethren in Camdozaal, although today there are no Imcando dwarves present in Great Kourend.

Back in the mainland, Arrav, after meeting Zemouregal in the Dream Land, was sent by his village's elders to find the mythical Shield of Arrav, in the possession of the Imcando dwarves in Camdozaal. After wandering through what would later become Asgarnia, Arrav settled at the foot of a mountain (possibly Ice Mountain) where he was greeted by several Imcando. Despite their refusals of knowing the Shield, Arrav stayed with them, hoping to gain their trust. After spending many days with the Imcando and learning their arts of mining and smithing, he was given the Shield.

Camdozaal would remain as the prosperous home of the Imcando until the early Fifth Age, when a faction of Fremenniks sought to destroy any users of magic in the Runecrafting Crusades. With their inclusion of magic in dwarven smithing techniques,[7] as well as experimentation with golems[8] left over from the Zarosian era,[9] the Fremennik turned their weapons toward Camdozaal.

The Imcando dwarves, believing their weapons to be strong enough to repel the invasion, were ultimately wiped out.[10] Today, they are now largely believed to be extinct, with Ramarno and Thurgo being the sole remaining Imcando dwarves on the mainland. From conversations with them, it appears that they are not yet aware of their fellow Imcando brethren beneath the Avium Savannah.