Ramarno is an Imcando dwarf found in the Ruins of Camdozaal, accessible after completion of the quest Below Ice Mountain. Ramarno believes that he is the last remaining Imcando dwarf. He requests the player's assistance in gathering Barronite for the Sacred Forge as he supposedly is blind. Players can collect Barronite shards throughout Camdozaal which can be given to Ramarno in exchange for buffs. Using the shards on him will give the player the option to feed their barronite shards to the Sacred Forge immediately, and save their power for later. All five of the permanent buffs can be activated at the same time.

If the player has completed The Knight's Sword quest, they will tell him about Thurgo. Doing so will give Ramarno hope of the future existence of the Imcando race.

If you bring him a redberry pie, he states that he's never tried one before, but enjoys it.

Ramarno will not appear at the Sacred Forge until you speak with him at the entrance of Camdozaal dungeon after completion of Below Ice Mountain.

Note: The shards handed to Ramarno can also be used to access the Camdozaal Vault. 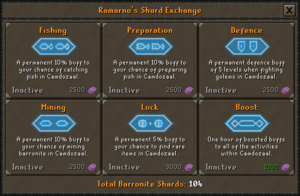 Simply show the item to Ramarno and he'll offer to convert them into shards.