Commander Lydia Fullore is the leader of the Kourend Royal Guard. As leader of the Royal Guard, she ensures that they are well trained and supplied.[1] She is found on the ground floor[UK]1st floor[US] of Kourend Castle.

During her time as a soldier, she was part of a squad requested by the Kourend Council to deal with a gang of thieves who had children in their ranks.[4] Though the operation was successful, she was distraught at the fact that the Council threw not just the men, but the children in prison, too.[5] 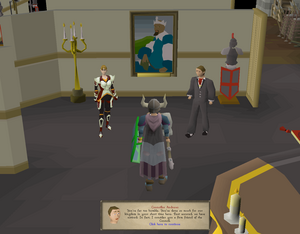 Andrews keeping a watch on Lydia after the incident with Hughes.

After the arrest of Councillor Sophia Hughes and her subsequent escape,[8] Lydia was tasked to investigate leads on where she might have gone and receives the help of the adventurer who helped arrested her.[9] With the adventurer's assistance, Sophia is discovered to have planned an escape via Veos' ship in Port Piscarilius, and Lydia moved quickly to intercept her. However, in a last ditch attempt, Sophia summoned the Judge of Yama, who incinerates her for taking advantage of Yama's generosity and his trust,[10] and proceeds to battle the adventurer, leaving Lydia to deal with Councillor Andrews' vitriol towards her for her failures in recapturing Sophia.[11]

Before her death, Sophia had mentioned that she and the rest of the Council had done something to a man and his girl,[12] believed to be King Kharedst IV and Rose. Afraid that Andrews would have a close tab on her, she reluctantly asked the adventurer to seek Martin regarding Rose's fate.[13]

Eventually, the adventurer's investigation led them to a small shack at the base of Mount Karuulm in the Kebos Lowlands, where the uncovering of a hidden entrance to a basement resulted in the discovery of Rose and Councillor Liam Orson, who had been caring for her out of guilt since she entered into a coma. Having been discovered, he confessed to the adventurer and Lydia that the Council had conspired to kill King Kharedst IV, but that it did so out of necessity.[14] Liam also revealed that the Council remain in contact with the mage who helped them kill the King to obtain potions believed to help treat Rose's condition. The mage was later discovered to be Xamphur, Xeric's closest comrade, who had intentionally put Rose into a permanent coma. Lydia was furious at the Council's deception and realized that they had fooled everyone in Kourend. 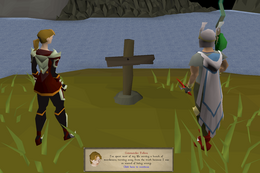 The adventurer and Lydia bury Rose, the last princess of Great Kourend.

After moving Liam to Xeric's Lookout, while the adventurer was investigating the mage Xamphur, Lydia studied the potions and found that Liam had been telling the truth. However, as there was no hope of waking Rose, she chose to end her suffering and held an impromptu funeral outside the shack.[15] With Liam's confession and the knowledge of Xamphur's involvement with the Kourend Council, Lydia asked the adventurer to gather the leaders of the five houses, Trobin Arceuus, Kandur Hosidius, Vulcana Lovakengj, Shauna Piscarilius, and Shiro Shayzien, to meet at Xeric's Lookout, where they would decide on the next course of action.

After agreeing on a plan, the leaders of the five houses proceeded to Kourend Castle and removed the Kourend Council from power.[16] After disbanding the Council, Lydia attended Kandur Hosidius' coronation ceremony, only for him to be assassinated almost immediately after. Shortly, Artur Hosidius, Kandur's son, succeeded his father. Lydia continues to investigate the assassination and promises to inform the adventurer of new developments as they come.