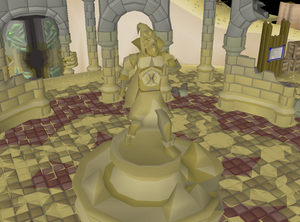 A weathered statue on Mount Quidamortem, depicting an ancient Xerician priest. The examine text implies that it is possibly a statue of Xeric himself.

Xeric was a powerful mage who ruled Great Kourend nearly 1,030 years ago. He was responsible for the Age of Strife and the creation of the lizardmen, who honour him as a great king.

Xeric is an extremely ruthless and power-hungry ruler who chooses to subjugate everyone he deems disposable regardless of how devout they are to him, stating that the weak deserve to die. He trusts very few people, but rewards them for their loyalty to him; he treats Xamphur cordially and extended a similar hand to Tekton. He does not take kindly to betrayal and other "failures", having punished Vasa Nistirio for his attempted coup and the Vanguard for what he perceived as cowardice.

King Shayzien VII took control of Great Kourend during the 32nd decade. During his reign, he was obsessed with the Dark Altar, and had spent a large majority of his time in the Tower of Magic performing experiments on citizens he summoned. Here, he oversaw the construction of various new sections, presumably to conduct magical experiments.

He was eventually killed in the Battle of the Concourse five decades later, and his body was never recovered.[2] A few days after the battle, Xeric appeared and was said to have had a similar appearance to Shayzien VII.[3]

This battle is also documented in Killing of a king, a text found in the Arceuus Library, where it is written that a coup d'état was attempted by his Elder Warriors, who successfully killed him.

After the death of King Shayzien VII, it was speculated that he had used the power of the Dark Altar and moved his spirit from his mortal body into an incorporeal one,[4] allowing him to gain massive power and emerge victorious from the battle against the soldiers. As he reigned Great Kourend for a hundred years, it can be assumed that he had achieved immortality before The Ascent of Arceuus. At this point, he began to refer to himself as Xeric. 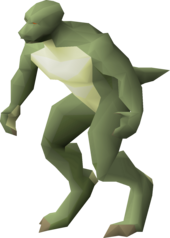 A lizardman, one of many created to serve Xeric.

With his newfound power, Xeric proceeded to kill the rulers of the five cities and claimed Great Kourend as his own.[5] However, while he was very powerful, he couldn't rule the people singlehandedly, nor could he rely on human informants. His solution was the lizardmen, whom he had secretly created sometime during the 37th decade (1,040 years ago) after the alleged failure of The Great Expedition via experimentation on lizards native to Mount Quidamortem. With the lizardmen at his disposal, who were fiercely loyal and did as he commanded without question, the people were powerless to resist his authority, and thus began the Age of Strife. Many fled from Great Kourend, seeking refuge south-west of the kingdom, beyond the Kebos Lowlands. Here, the refugees founded the kingdom of Varlamore.[6]

It is believed that the Tasakaal had granted the knowledge to immortality to Xeric for reasons unknown, and misused it; because of this, and his widespread slaughter of the people that would come after, the Tasakaal view him with contempt and become offended whenever his name is spoken to them,[7] instead calling him the "great betrayer".[8]

A set of Xerician robes, possibly worn by loyal followers of Xeric.

The lizardmen served as Xeric's primary guards and enforcers. They would sweep the cities and farms, kidnapping people for use in his many experiments.[9] The records of the experiments that remain imply that these experiments eventually led to the lizardman's creation.[10]

During the 40th decade, Xamphur, Xeric's closest comrade, achieved a breakthrough in the study of teleportation, giving Xeric the ability to perform a previously impossible feat. Using Xamphur's studies, this resulted in the creation of his talisman to teleport to various places across Great Kourend in an instant.

At the height of his reign in the 43rd decade, a resistance group called HAX (Humans Against Xeric) attempted to storm the Tower of Magic and defeat Xeric, but failed, resulting in the loss of two hundred members.

During 312-47 (the 312th day of the 47th decade), Byrne, a farmer, witnessed a Lizardman guard murder a child whilst working his farm. Outraged, he slaughtered the lizardman, with the entire town as witnesses. Urging the people to fight back, the people revolted, and within seven days, the lizardmen were outnumbered and driven beyond the kingdom into the Kebos Lowlands. During the revolt, the temple surrounding the Dark Altar was destroyed as well, weakening Xeric's power and forcing him into exile.[11] 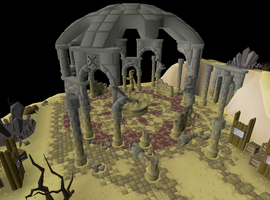 The remains of the Xerician temple on the summit of Mount Quidamortem.

After his exile, Xeric no longer had the Dark Altar's power to sustain his immortality,[12] so he and the rest of his followers travelled west to Mount Quidamortem, where his artisan Tekton built a massive underground complex for him. In addition, the unstable altar he had ordered to be built in the small cave within the mountain would help maintain his immortality, as it allowed the Dark Altar's power to reach beyond where it previously could, amplifying its power.[13]

Based on the journals dropped in the chambers, Vasa Nistirio, Tekton, and several other unidentified members (his council, a creature keeper and many "servants") accompanied Xeric to the mountain.

Tekton's newly created temple was capable of harnessing the power of "cave magic" from the crystals within, which pleased Xeric;[14] however, Xeric soon became annoyed when his other followers, especially the "nasty high priest," began using it,[15] so he had Tekton demolish the temple. Tekton complied, but only disabled it, in the event that Xeric changed his mind.[16] Tekton tried to teach Xeric how to use the "cave magic" without the temple, but failed.[17] Xeric eventually took Tekton underground and gave him a new form[18] and enhanced his anvil, teaching him how to repair his new body.[19] 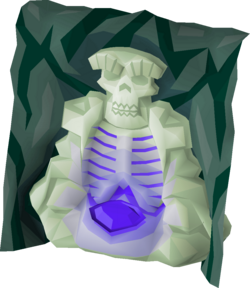 A carving found within the Chambers of Xeric beneath Mount Quidamortem, which depicts a stylised representation of Xeric.

Xeric conducted extensive experiments in the chambers, which caused a dramatic change in the flora surrounding the mountain. [20] Having acquired several stray dogs, Xeric "hired" a hound master, as the creature keeper had died to lizardman poisoning after performing an experiment of his own. With the hound master's assistance, Xeric continued experimenting on them, eventually producing a Muttadile and a meat tree (a byproduct of the muttadile experiments);[21] unbeknownst to him, the muttadile was pregnant, and thus a second muttadile was born in the process.[22] It is unknown what happened to the other dogs and the hound master. More of Xeric's followers continued to arrive and he soon came down to visit the camp, which they took with joy. He then revealed a green tonic and ordered all in the camp to drink it, claiming that it would make them stronger and healthier. Soon after, he sent robed men to the camp; it is highly implied that all of the camp's inhabitants turned into lizardmen from drinking the tonic.

With his works still in progress, the Vanguard eventually found Xeric and re-pledged their allegiance to him.[23] Xeric treated them with respect;[24] however, this was just a ruse. He brought them down to the chambers along with a loyal follower, upon which he dropped the kind act and revealed a face of fury, using the crystals to warp the Vanguard into their current form.[25] The follower was shaken by Xeric's brutality, who revealed he had known their feelings. He then tasked them with writing a book regarding these events.[26]

Xeric and his followers eventually stumbled into a chamber where he noticed a massive rip in time and space.[27] He used his powers to open the rift,[28] but it was too much; it was a two-way mirror where the Abyss saw Xeric and his group and vice versa.[29] A massive demon-like wasp squeezed through the rift and overwhelmed the group,[30] claiming the chamber as its own. Xeric refused to accept defeat and sought a way to tame the creatures for his own purpose; as there is no mention of its success, he likely failed and eventually gave up on the prospect.

He later appointed Vasa Nistirio as his new high priest, but Vasa had gone insane after gaining a new form and demanded that Xeric worship him instead.[31] Despite Vasa's newfound strength, Xeric was able to defeat the treacherous high priest and bound him to the four crystals in the chamber.[32] He then appointed another high priest to succeed Vasa.

Eventually, Xeric and his remaining followers encountered the Guardian in the Deep and defeated it,[33] obtaining a great amount of power in the process.[34] The new high priest wrote a journal documenting these events. Xeric and the others left their equipment behind in the caves, using his newfound powers to seal them in crystal. They then left for lands unknown, the new high priest believing that Xeric had greater ambitions in mind.

Xeric's activities for the next hundred years is unknown, but it is implied that he did not have a form to control and lingered about aimlessly. Xamphur, wishing to bring him back, orchestrated a series of events intended for his return, first by leading the treasure hunter Veos to him and using a proxy to allow Xeric to control him with bursts of dark energy. Xeric commended him for his ambition and that he had given up on Kourend, but told him that he had found another way to gain more power with no one able to stop them. Xeric then sensed an adventurer's presence and ordered Xamphur to dispose of them, heading to the "far south" for further instructions once the deed was done. Unbeknownst to either of them, the adventurer had survived.