Xamphur is one of Xeric's closest comrades that players must fight during A Kingdom Divided. Xamphur mainly attacks using grasp spells, which can bind the player if damage is taken; praying Protect from Magic will greatly reduce any damage done by his grasp spells. He uses Protect from Magic himself during the fight, thus rendering him immune to Magic spells. The fight begins with a number of marks on the floor, and walking over these will inflict a Mark of Darkness upon on the player, causing Xamphur's grasp spells to become twice as effective, and cause corruption to occur twice as often if they get corrupted by one of the other mechanics mentioned below. Avoid the marks to fully avoid this effect. 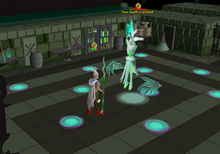 Other than grasp spells, he has two special attacks:

Xamphur has over the last century planned a conspiracy spanning the entire of Great Kourend with the intention of bringing back his master, Xeric. He is referred to by the lizardmen as Yo'kal ahk.

Long ago he played a role in plundering and looting Dinh's Redoubt in search of a location to perform experiments. In a letter written to High Priest Nistirio, Xamphur claims to have looted some of Dinh's equipment and taken it back to Quidamortem.

During the 40th decade, Xamphur achieved a breakthrough in the study of teleportation, giving Xeric the ability to perform a previously impossible feat. This allowed him to instantly travel around Great Kourend and aided in the creation of his talisman.

After Xeric's fall, Xamphur sought a way of bringing him back, but was unable to do so. Eventually he ended up imprisoned by the lizardmen in the Lizardman Temple in Molch, having been accused of his disappearance. A century before the events of A Kingdom Divided Xamphur managed to convince their shamans to release him and immediately began setting plans in motions to bringing Xeric back. This eventually led to Xamphur corrupting King Kharedst IV by giving him a cursed flask, an alliance and conspiracy with the future councillors of Kourend, the death of both King Kharedst and the crown princess Rose, the sabotage of the Dark Altar and the Doors of Dinh and presumably other schemes.

Xamphur is later seen conversing with Veos over the status of his plan before they are discovered by the adventurer. In it, Xeric, who possessed Veos' body, commends Xamphur for his ambition and cunning, but tells him that he has no more use for Kourend, much to his confusion. Xeric then senses the adventurer and orders him to dispose of them before meeting him in the far south, implied to be Varlamore. The adventurer is able to injure him, but he quickly recovers and knocks them out with a powerful lightning spell and orders the lizardmen to dispose of their corpse. This would prove to be an oversight as the spell only rendered them unconscious, and the lizardmen tasked with the disposal fled, believing them to be a zombie. He later abandoned the area since it was compromised, and Arceuus mages discovered some new spells, some of which were given to the adventurer after they deemed it safe.