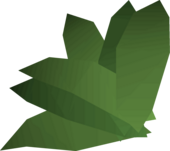 Irit leaf is a mid level herb that can be cleaned at level 40 Herblore. Each cleaned irit leaf yields 8.8 Herblore experience. It is commonly dropped while fighting chaos druids, but can be dropped by almost every monster capable of dropping herbs.

To create a potion, you need to add the cleaned herb to a vial of water to create an irit potion (unf), and then add the secondary ingredient. You can create super attack potions by adding an eye of newt. Creating super attack potions is considered one of the easiest methods to train Herblore, especially for ironmen, as eyes of newt are very easy to obtain, and the finished product is very useful for combat purposes. Eye of newt packs can be bought for 300 gp at various shops, and contain 100 eyes of newt. You can also create superantipoison potions by adding unicorn horn dust. In order to create an antidote++ however, you need to add the irit leaf to a vial of coconut milk, creating antidote++ (unf), and add magic roots as secondary ingredients.

According to the book Gielinor's flora - herbs, irit has always had cultural significance due to its connection with the dead and is often synonymous with Icthlarin, the Menaphite god of death, and is often found growing in or near graveyards.

An irit leaf can be added to a vial of water to create an irit potion (unf), which can be used to make the following potions: