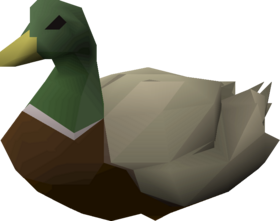 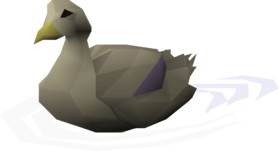 Ducks are small animals which can be found in rivers or lakes. They are a fairly good way to start training the Magic skill with low-Level Curse spells and even Strike spells.

If ducks are next to the shore it is possible to hit with a normal Melee weapon, however it is uncommon for them to be there with the exception of the Fishing Guild docks, Falador Park, and the River Lum in Lumbridge.

For melee it is only otherwise possible to use a halberd, however Ranged or Magic is most reliable. Ammunition will be lost if the ducks are not on land.