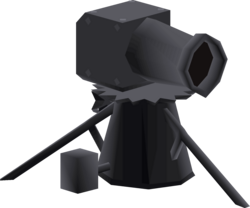 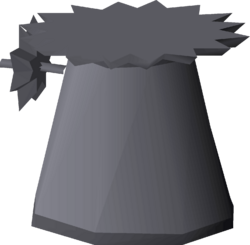 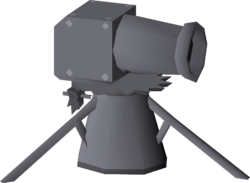 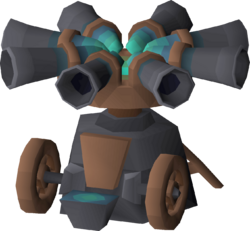 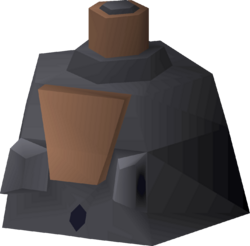 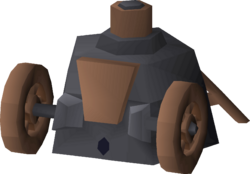 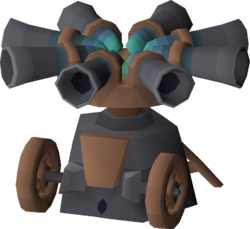 The cannon parts can be ornamented using the shattered cannon ornament kit which converts it into a cannon resembling one from RuneScape Classic.

The cannon has a static max hit of 30 with cannonballs and 35 with Granite cannonballs, regardless of the player's Ranged level or any other bonuses to the player's ranged damage.

The cannon's accuracy is affected by the player's accuracy bonus,[1] which can be boosted[2] and is calculated differently depending on weapon type and attack styles.

The cannon's accuracy, while derived from the accuracy of the player's selected attack style, will always roll against the target's range defence.[1]

After the cannon has been set up, loaded, and fired, the barrel will rotate and fire at targets within its line-of-sight and range. The cannon barrel rotates in discrete intervals; there are eight directions the barrel may face, and the barrel makes a 45-degree turn every 0.6 seconds (one game tick), completing a full revolution in 4.8 seconds. The cannon fires up to one cannonball while facing each direction, so it fires up to eight cannonballs per revolution. It will fire 6000 cannonballs per hour. 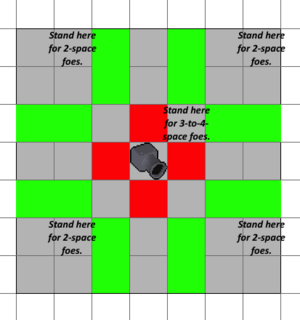 For monsters larger than 1x1, only the south-western tile is shot. That being said against 1x1 - 2x2 targets, the worst possible spot to stand is in the middle of the cannon or any corner under the cannon. The best way to slay those is to lure them into a multi-hit spot, or stand far from the cannon. For 3x3 monsters (e.g. Black demons), one should stand under the cannon in the north-east tile (1,1).

Outside of Slayer, using the cannon can speed up kills on lizardman shamans and Wilderness bosses. Ironman mode accounts may also find it useful when taking on Corporeal Beast, as the dark energy core will not return for the rest of the kill if the cannon kills it while it is midair. Players may also use a cannon to obtain champion's scrolls faster, one of which is required to obtain a music cape, while players that complete the full champions' challenge are awarded with a champion's cape.