Hopespear's Will is a miniquest where the player assists Hopespear, a goblin spirit, in returning the remains of the goblin high priests to Yu'biusk, the ancestral goblin homeland. It follows on from the events of Land of the Goblins.

Head to the Goblin Cave entrance located just east of the Fishing Guild's entrance. Enter the cave and walk north, then west until you find two goblin guards guarding the entrance to the temple. Drink a dose of goblin potion and enter the temple. Do not equip the ghostspeak amulet and ring of visibility yet, or you will revert to human form and be expelled from the temple. 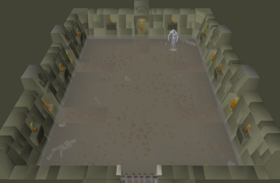 The crypt of the Goblin Temple.

Make your way to the crypt within the Goblin Temple, and once inside then equip the ghostspeak amulet and ring of visibility. You will see the ghost of Hopespear, the goblin prophet. Ask him why he is here, and he will tell you that he is waiting for the Big High War God to take his spirit to Yu'biusk.

Tell him that you have been to Yu'biusk, and he will ask you for a favour: to free the souls of the goblin high priests. To do this, you must complete a ritual which includes killing the goblin priests, without the use of weapons, spells, or armour, and retrieving their bones to be buried in Yu'biusk.

Remove any items you have equipped or else the goblin high priests will not drop their bones upon defeat. This includes any equipment that gives stat bonuses, and jewellery like rings of recoil. Attempting to cheese the fights with stat-less attack speed enhancing weapons such as the Ham joint or Goblin paint cannon will not work either. However, the ghostspeak amulet and ring of visibility can still be worn.

Now summon and battle the five high priests as done during Land of the Goblins by speaking their name over their grave. Unlike the quest, the high priests can be fought in any order.

Strongbones is by far the hardest of the high priests. To take him on it is recommended to have at least level 70 melee stats along with 70 Prayer for Piety, or slightly higher melee stats if using Chivalry. A Divine super combat potion is helpful due to it preventing combat stats from draining, but Strongbones will also periodically lower your Attack, Strength and Defence, so a few regular super combat potions are also advised to keep boosting throughout the fight. Strongbones will hit up to 18 regularly so bring as much high-healing food as possible, as well as 2-3 prayer potions to keep up Protect from Melee and Piety.

Note: You do not have to defeat all the high priests in one go; you can leave the crypt to restock and bank any bones collected thus far. When returning, another dose of goblin potion is needed to enter the crypt but the ghostspeak amulet and ring of visibility are not needed. If you die fighting any of the high priests, you will lose any bones in your inventory.

Finally, use fairy ring code BLQ to reach Yu'biusk, and once there bury the bones. Players do not need to bury all five sets of bones at once.

The rewarded XP for each priest is as following:

These bones do not benefit from the increased experience bonus granted after burning chewed bones on a pyre ship, nor can they be converted using the Sinister Offering spell.

Hopespear's Will was released in RuneScape on 12 November 2007 alongside Land of the Goblins. Both this miniquest and its parent quest were extracted from the August 2007 Archive of RuneScape that Old School RuneScape is built off of. Compared to the original, the Old School version has a few differences: