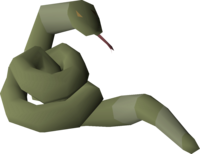 Juna is a large serpent and a legendary Guardian of Guthix. She is very ancient and is known to have been on Gielinor in its Second Age, thus making her well over six thousand years old. At the end of the Third Age, as one of Guthix' most loyal followers, she was tasked by him to protect the Tears of Guthix cave in the Lumbridge Swamp Caves, which she has done for millennia. Her separation from Guthix led her to idolise him out of desire to be with her god again. She plays a role in the Tears of Guthix quest, and in the Dorgeshuun quest series.

Players can talk to her to start the Tears of Guthix minigame. She will let them into the cave she guards once every seven days, as long as they have gained 100,000 total experience points or 1 quest point in that week.

During the Third Age there was a great war among the gods. When Guthix awoke, he put a stop to the violence, then returned to sleep again. However, as he descended to the depths, he took pause to rest. Thinking of the destruction that had been brought on the world he found, loved, and shaped, Guthix wept and, as a result of his deep grief, the very rocks wept with him. Realising that his essence had become a part of the rocks, Guthix assigned Juna to guard the spot and judge who was worthy to enter.[1] Over the many years since then, she's become a bit bored and loves to hear stories of the world above.