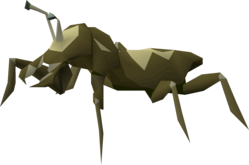 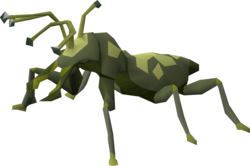 Cave bugs are monsters that require level 7 Slayer to kill. They are found in the Lumbridge Swamp Caves, requiring a light source and a rope to enter, and stronger variants can be located in the Dorgesh-Kaan South Dungeon. They are a good source of low level herbs, which can aid beginning players in training Herblore. Their Hitpoints regenerate about 20 times faster than normal.[1]

Cave bugs that are significantly more powerful—with a combat level of 96—can be found in the Dorgesh-Kaan South Dungeon, located south of the city of Dorgesh-Kaan, but can only be accessed after the completion of the Death to the Dorgeshuun quest through fairy ring AJQ.

A light source is required for these dungeons, along with a rope to place down on the hole leading to the Lumbridge Swamp Caves, if it has not been done so previously.

Players should be on the lookout for wall beasts within the Lumbridge Swamp Caves, which are monsters that will grab and attack you, if you are in their line of sight. To avoid being hit, either stand one square directly beside a hole in the wall and run across to the other side, or have a spiny helmet equipped.

Drop rates estimated based on 372,736 kills from the Drop Rate Project, unless otherwise cited.

Drop rates estimated based on 15,744 kills from the Drop Rate Project, unless otherwise cited.

Slaying a Cave Bug is a task in the Lumbridge & Draynor Easy Diary.