Keef is the head of the city guards in Gu'Tanoth, found near the other city guards past all the bridges (where you solved the riddle a guard gave you in the Watchtower Quest; you may need to bring 20 coins to pass the bridge again). He is fought during Monkey Madness II in order to convince him not to ally with the monkeys of Ape Atoll.

It is highly recommended to use the Protect from Melee prayer before speaking to him when accepting his challenge, as he can hit up to 47. Although Keef can hit through Protect from Melee, he will deal far less damage if it is active. 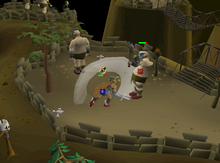 The player and Keef fight to the death.

As Keef is a large NPC, you can use the nearby tree, for example, as a safespot. When he is defeated, Keef will beg for mercy and agree to not help the monkeys.