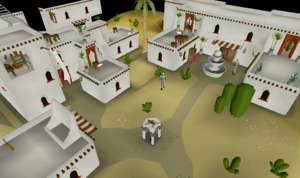 Pollnivneach is a town located in the middle of the Kharidian Desert. It can be accessed by walking, or by riding a Magic carpet. The desert effects stop when in this town. It features heavily in The Feud quest. It has a cooking shop, a pub and a kebab shop. You can ride a magic carpet to Nardah from here. It is also notable that every person in the town, excluding the Menaphite thugs and Bandits, is named "Ali".

The Menaphite and Bandit gangs are the source of the conflict which engulfs Pollnivneach. The Bandits control the northern half of the town, while the Menaphites control the southern half. Both gangs are constantly engaging in a turf war, and hold much influence and power over the entire town, including the mayor.

If a player's house portal is in Pollnivneach, they may use the House Teleport spell to reach the portal, thus bringing them to Pollnivneach.

Similarly, a Scroll of Redirection on a Teleport to House tablet allows the player to teleport to the House Portal, requiring level 20 Construction.

Pollnivneach hosts many enemies. Some of these enemies are human while some, outside of the town, are not.

Players with 70 Agility can use the rooftop course, by climbing the basket northwest of the bar. The course finishes at a house in the north part of the city, directly east of the magic carpet system.