From Old School RuneScape Wiki
Jump to navigation Jump to search
This article is about the book. For the music track, see Arachnids of Vampyrium (music track). 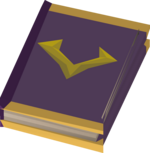 Arachnids of Vampyrium is a book that appears on the ground after defeating the Nylocas Vasilias in the Theatre of Blood. It can also be obtained from the grand bookshelves in Verzik Vitur's treasure vault beneath her throne room, accessed after her defeat.

The book gives details about the various species of nylocas, and tells how they were brought from Vampyrium, the vampyre's homeworld.

If lost, it can be reclaimed by defeating the Nylocas Vasilias, or from a bookcase within a player-owned house.

The following text is transcluded from Transcript:Arachnids of vampyrium.
Introduction

The nylocas are a diverse group of arachnids native to the world of Vampyrium. On their own, they are easily manageable and possess little threat to the vampyre population. However, nylocas typically group together in clusters. As such, they have the potential to quickly overcome more powerful foes.

When the Stranger from Afar led the vampyres to Gielinor, a large number of nylocas travelled with them. These nylocas were in the possession of Verzik Vitur, who had domesticated several of their species.

Over her millennia spent on Gielinor, Verzik has created a diverse breeding progream for the nylocas. Today, the number on Gielinor far exceeds that of their original Vampyrium ancestors.

Although there are only three true species of nylocas, the generations of selective breeding have resulted in four new variants being identified on Gielinor. The purpose of this book is to detail the different types of nylocas.

One of the three true nylocas originally from Vampyrium. The Ischyros are grey in colour and are notable for their hard, spine covered abdomens. The size of these nylocas can vary, but they typically do not grow much bigger than an adult human. The legs of an Ischyros end in sharp claws, which they aptly use against their foes.

Another of the three nylocas native to Vampyrium. The Toxobolos can easily be distinguished by their dark green colour and their wide, leaf-shaped claws. Like the Ischyros, they vary in size but generally do not grow larger than an adult human. Whilst they do use their claws offensively in the same way the Ischyros do, their preferred method of combat is to launch deadly spines at prey and predator alike.

The last of the true nylocas. The Hagios are notable for their light blue colour and for the magic that visibly radiates from their exoskeleton. In size and general behaviour, they are similar to the other true nylocas. However, the Hagios also have the ability to target their foes with dangerous magical attacks.

The Matomenos are one of the new variant subspecies of nylocas that were bred by Verzik Vitur. They are slightly larger than true nylocas and are easy to identify due to their blood red colour. Likely due to their domestication, the Matomenos are not as aggressive as other nylocas and rarely attack, even if provoked. Instead, they are purely scavengers that will feast on the blood of already dead prey. This blood is stored in their abdomen, adding to their distinct colour.

The Athanatos are the second subspecies of nylocas that were bred as part of Verzik Vitur's breeding program. Created through selective inbreeding of Matomenos, the two species are very closely related. The Athanatos are slightly larger then the Matomenos and like them, they will drink the blood of fallen foes and store it in their abdomen. However, the Athanatos have the ability to modify this blood internally, giving it unique properties. This modified blood gives them their distinctive purple colour. Although Athanatos are not directly aggressive, they will still support their kin by launching blood with healing properties.

Another new variant of the nylocas and arguably the most dangerous. The Vasilias are much larger then their cousins and have a limited ability to shapeshift, taking on the appearance and abilities of true nylocas. As the newest variant of nylocas, they are still a rarity compared to other types. However, thanks to their innate abilities, one Vasilias has the potential to do more damage than an entire cluster of other variants.