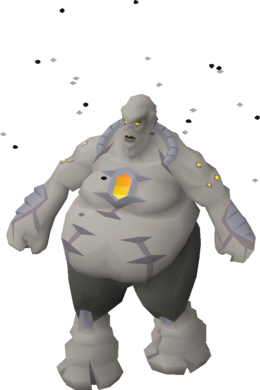 The Pestilent Bloat is the second encounter in the Theatre of Blood. It was created by a crazed vampyre known as "The Butcher" upon Verzik Vitur's request.

According to a book titled The butcher, the Bloat was created by using three giant heads, an ogre's corpse, four buckets of human blood, two cyclops arms, two catablepon legs, an apple pie and a sense of pride. 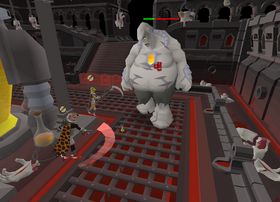 A group of players fighting The Butcher's crazed creation, the Pestilent Bloat.

The bloat will walk around its room in a square as soon as the party enters the room. If any player is within its line of sight, the Bloat's flies will attack them, causing players to take rapid hits of 10-20 every tick until they are out of the Bloat's line of sight. This will spread to other players in the raid also and can therefore kill a party very quickly.

After seven or fourteen cycles of mutilated flesh falling from the ceiling, it will stop moving, allowing players to attack it. After a few seconds, it will stomp the surrounding area, dealing large amounts of damage. If its defence has been reduced, it will regenerate to full when it stomps. If a player is hit by a mutilated flesh, it will deal 30–50 damage and stun them temporarily. Falling flesh can be evaded beforehand by looking for their shadow on the floor.

The Bloat will also change direction randomly throughout the fight. Along with this, it will also change the speed at which it is walking. It has two different speeds of moving: walking (one tile per tick) and running (two tiles per tick).

Above 60% hitpoints, Bloat will always walk around the room.

Between 40% and 60% hitpoints, Bloat will always run around the room.

Below 40% hitpoints, everytime a hitsplat from a player appear on Bloat, its speed will change.

In addition to the previous mechanics, mutilated flesh will fall from the ceiling all of the time; starting as soon as the first player enters the room. It will continue to fall even when Bloat has stopped.

He also is more likely to turn around while he is moving than in normal mode encounters.

In entry mode, Bloat can scale down to 20% of its original Hitpoints when done in a solo party. The encounter is generally less punishing for mistakes due to its lower damage from flies and the stomp. This allows players the freedom to practice against the Theatre of Blood bosses without as much risk.