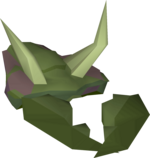 Like the normal kq head, it can be taken to the taxidermist in Canifis, where she will charge 50,000 coins and turn it into a stuffed tattered kq head. They can then mount it in their player-owned house using 2 mahogany planks and 2 gold leaves, where talking to it is part of the Desert Elite Achievement Diary. However, it cannot be used to create a green slayer helmet, nor can it be sacrificed at the Dark Altar in Arceuus.

When players take it to the Taxidermist, she will say "That's not the most impressive head I've seen but I think I can just about manage this one. Preserving insects is always tricky. I'll have to be careful..."