The Easter ring is an untradeable item which, when worn, turns the player into an Easter egg. It can be obtained by completing one of the Easter holiday events that occur once per year. This also rewards the player with all other holiday items associated with Easter. 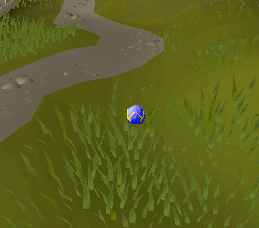 A player morphed into an egg.

The colour of the easter egg that the players turns into are based on their current location.[1] Previously, the ring would randomly pick a colour to transform the player into.

Easter rings were first made available in Old School RuneScape on 22 July 2013, during a period in which rare holiday items would be dropped around Gielinor during the summer rares drop. When the item was picked up, another would spawn in a random location.

This item can be stored in the toy box space of a costume room.