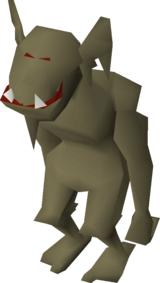 Drunken Dwarf's Leg is a troll child that ate a drunken dwarf's leg during a cutscene in My Arm's Big Adventure. At first, he was simply referred to as an Unnamed troll child, but found a drunken dwarf that had been chucked off the roof of the Troll Stronghold, leading to him eating the dwarf's leg and earning his name.

When speaking to him in the camp outside the Troll Stronghold, your character will comment on his strange name. He will respond by saying it was the first thing he ate, but he didn't like the taste, so he didn't eat much of it.

After the events of Making Friends with My Arm, he replaces My Arm as the herb patch caretaker in the Troll Stronghold.

Drunken Dwarf's Leg can actually be seen planting and harvesting the hardy goutweed he takes care of. The hardy goutweed he tends seems to have only three growth stages. The first growth stage progression seems to take 5 minutes, which is the shortest interval between growth stages in the Farming skill, but the last progression seems to take only two and half minutes, which is faster than any farming crop planted by the player can grow. The goutweed can also become diseased, and Drunken Dwarf's Leg can be seen curing it when that happens. The goutweed is also harvested instantly.