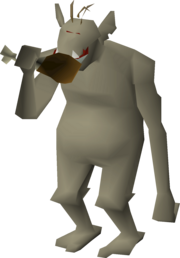 Ug is a Troll who resides in the Stronghold. The player considers him to be a wimp, and a pathetic excuse for a Troll. The player encounters him in the quest Troll Romance, where he is found crying in a corner. When asked what he is crying about, Ug reveals that he is in love with the beautiful Troll Aga, but Aga is taken already, by a fearsome, strong Troll called Arrg. In Troll tradition, in order to win the favour of a female, male Trolls must fight and kill contestants for the female's love. Here Ug is stuck, as Arrg is strong and Ug is a weakling, so the player must defeat Arrg for him, and also pick a Trollweiss flower to prove Ug's love for Aga. With some trolls, the name of what they first ate is unknown. This is the case with Ug so he was named after the sound made by the first thing he ate. This is the same case with Arrg and Aga.