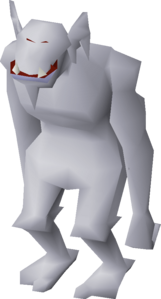 The troll father is the father of the troll child near the Ice Gate north of Trollheim. He, along with his wife, was captured and frozen by Kamil. Dialogue with the troll father suggests that he had found the Ice diamond, not knowing what it was and planned to return it to its owner. He is freed with his wife by an adventurer after their son told the adventurer that they had the diamond. After the quest, he can be found near the Ice Gate, along with his son and wife.

Like his wife, the troll father speaks perfect English, unlike other trolls.