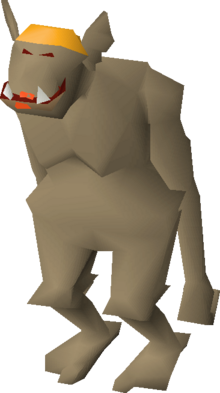 Aga is a female troll and one of the only female members of the species as of yet seen in-game, with the exception of the ice troll females on the Fremennik Isles, the mother of the troll child, and Snowflake from Making Friends with My Arm.

She is primarily involved in the Troll Romance quest, and must be convinced by the player to fall in love with Ug, instead of her current boyfriend, Arrg. The player must do this through various tasks such as giving her a trollweiss and by defeating Arrg in combat. After the quest, Aga and Ug are together. With some trolls, the name of what they first ate is unknown. This is the case with Aga so she was named after the sound made by the first thing she ate. This is the same case with Arrg and Ug.